20/20 Hindsight, in the Year 2020… Do Recent Maryland Court of Appeals’ Decisions Suggest It’s Time to Permit Citations to Unreported Opinions?

Over the past two years, there has seen pointed recognition by the Court of Appeals of Maryland, on the issue of citing to unreported Maryland opinions, which make up about 90% of the Court of Special Appeals appellate decisions.   Under Maryland Rule 1-104, unreported opinions cannot be cited in our appellate or trial courts as, precedent or as persuasive authority, but otherwise may be used under very specific conditions, such as “law of the case, res judicata, or collateral estoppel.”

(a) Not Authority. An unreported opinion of the Court of Appeals or Court of Special Appeals is neither precedent within the rule of stare decisis nor persuasive authority.

But this Rule puts Maryland in contrast with most other states, and the Federal Rules since at least 2007, which allow citations to unreported opinions as “persuasive” authority, when involving similar or identical legal and factual issues. END_OF_DOCUMENT_TOKEN_TO_BE_REPLACED

Workers paid a “day rate” instead of by the hour, calculating their overtime compensation, and the Maryland Wage and Hour Law and the FLSA

How should an employer compute overtime pay for a worker paid by the day instead of the hour? In an opinion authored by Judge Kevin Arthur, Maryland’s Court of Special Appeals addressed that question in Poe v. ISEI Md. Corp., 243 Md. App. 243 (2019). Leonard Poe worked in the trash-hauling business, where he was paid a “day rate.” That form of “compensation is common in the trash-hauling industry, because it motivates employees to work quickly and efficiently: the sooner the employees finish the job, the greater their rate of pay.” Id. at 245. If Poe worked over forty hours in a week, both the Maryland Wage and Hour Law and the federal Fair Labor Standards Act entitled him to receive overtime. When that happened, his employer, IESI, relied on a federal regulation in calculating how much overtime it owed Poe. He disagreed with that mode of calculation, however, and sued IESI, “claiming that the federal regulation was inconsistent with the Maryland Wage and Hour Law and that, in relying on the federal regulation, IESI had understated the amount of overtime compensation he was due under State law.” Id. The trial court ruled for IESI, granting its motion for summary judgment, and the Court of Special Appeals affirmed that decision. In reaching that conclusion, the Court of Special Appeals examined the pertinent federal and state statutes and regulations, and held that the employer and the trial court had properly relied on the federal regulation and that IESI had paid Poe the right amount of overtime. END_OF_DOCUMENT_TOKEN_TO_BE_REPLACED

The Maryland Court of Appeals today posted grants in four cases. They are listed below, with questions presented and links to the Court of Special Appeals opinions under review. END_OF_DOCUMENT_TOKEN_TO_BE_REPLACED

Event: Land Use and Other Administrative Appeals (with three appellate judges!)

Please register at this link. 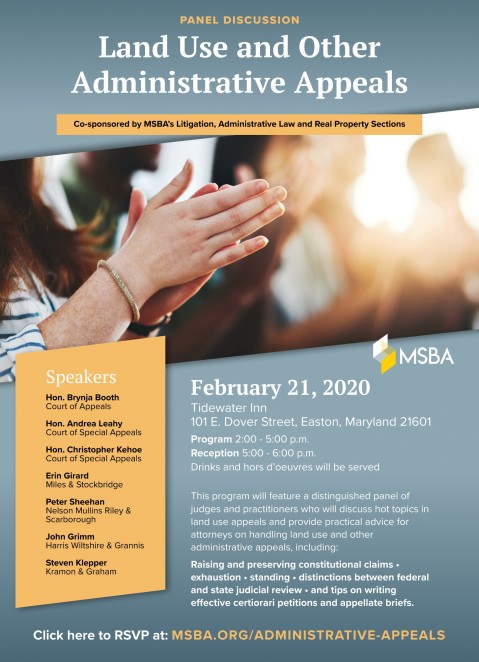 Nine nominated for vacancy on Court of Special Appeals

On Wednesday, the Appellate Courts Judicial Nominating Commission nominated nine lawyers and judges for consideration by the Governor for the vacant at-large seat on the Court of Special Appeals: END_OF_DOCUMENT_TOKEN_TO_BE_REPLACED

Although it is well-established Maryland law that a medical negligence plaintiff must support her claim with expert testimony, the Court of Special Appeals recently issued the first Maryland appellate decision to hold that defendants have the same obligation when asserting an “empty chair” defense. Reiss v. Am. Radiology Servs., LLC, 241 Md. App. 316 (2019). The well-established “empty chair” defense asserts that a non-party’s negligence caused the alleged injury.[i] Under Reiss, those asserting the defense now must elicit “expert testimony, to a reasonable degree of medical probability, that the non-party breached the standard of care.”[ii]

Although the rule announced in Reiss is relatively straightforward, the holding’s full implications remain unclear for litigants in medical negligence cases. The Court of Appeals may address these issues on February 6 at oral argument in Reiss. The court can resolve an important unanswered question: Can defendants elicit the testimony from a properly qualified plaintiff’s expert? The Court of Special Appeals’ reasoning in Reiss and existing Maryland law should allow it. END_OF_DOCUMENT_TOKEN_TO_BE_REPLACED

Tweets from the Editor-in-Chief