Last Thursday, I had the pleasure of moderating a panel at the Federal Bar Association’s 2015 Annual Meeting in Salt Lake City. Our panel, “The Renewed Debate on Unpublished Appellate Opinions,” included Judge Carolyn B. McHugh of the Tenth Circuit, Senior Judge Andre M. Davis of the Fourth Circuit, and Michelle Olsen of Appellate Daily. 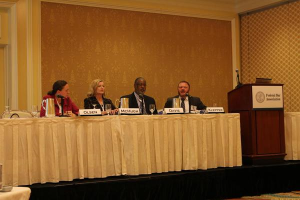 The panel had a strong connection to the areas served by the BWI Thurgood Marshall Airport and the Salt Lake City International Airport. Judge Davis and I are, of course, both based in Baltimore. Michelle Olsen is based in D.C. but is from Salt Lake City originally (meaning I had a chance to meet her delightful mother and aunt). And Judge McHugh, although born on a family trip to Pennsylvania, lived in Baltimore in her early years and now is based in Salt Lake City.

The panel was a blast. Huge thanks:

It was my first attending the FBA Annual Meeting, but it certainly won’t be my last. It was a wonderful time, and I’ve already put next year’s meeting in Cleveland on my calendar. There isn’t any video or audio available, but Michelle’s Twitter feed has some highlights. Also, if you’re into super-nerdy Supreme Court humor, you can check out this Twitter exchange from my trip to the Utah Museum of Contemporary Art.

Tweets from the Editor-in-Chief